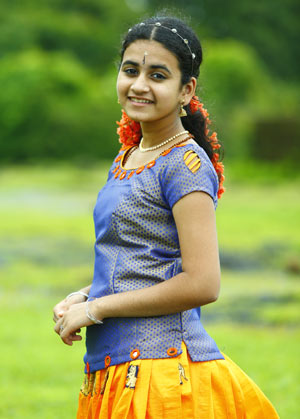 Sooryagayathri is a 13 years charming, young girl with a golden voice who is capturing the hearts of music lovers across the globe. The videos on several social media sites featuring Sooryagayathri in the ‘Vande Guru Paramparaam’- spiritual musical series, produced by ace Carnatic vocalist, Sri Kuldeep M Pai, have raving reception in nations far and wide. She is an abundantly blessed singer whose Bhava- filled, soulful singing has been compared to that of the doyen of music- M.S. Subbulakshmi herself.

Sooryagayathri hails from the village of Purameri in Vadakara, North Kerala.
She is formally trained in Carnatic music by Smt. Anandi and Sri Nishanth. Sri Kuldeep M Pai has been her mentor both musically and spiritually whose guidance has helped her navigate her role as an outstanding musician. Her father, Sri P.V. Anil kumar is an accomplished Mridangam artist in Kerala and her mother, Smt. P.K. Divya is a poetess with a natural flair.

Sooryagayathri got the achievement of M.S Subbulakshmi fellowship in music at a very tender age of 10 from Mumbai Shanmukhananda Sabha and Trivandram Kalanidhi Sangeeth Rathna award.  She has received Samaj Sakthi Award in 2017 with her Guru Kuldeep. M. Pai, from Hariharaputhra Bhajan Samaj Mumbai.

Moreover she has her totalviewer ship of more than 150 million in YouTube. She is the main singer of the music series` Vande Guru Paramparam’ produced by Kuldeep. M. Pai. Doing her Bhajan concerts in all over in India and in abroad (South Africa, Singapore etc), She has won million hearts. 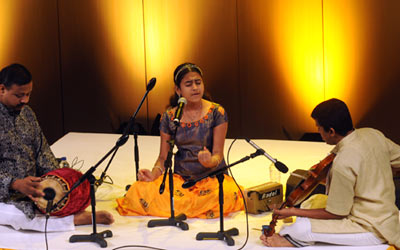 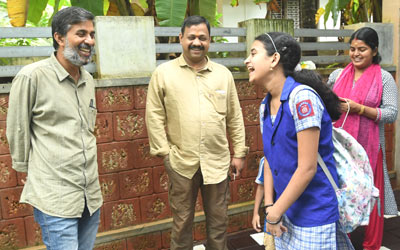